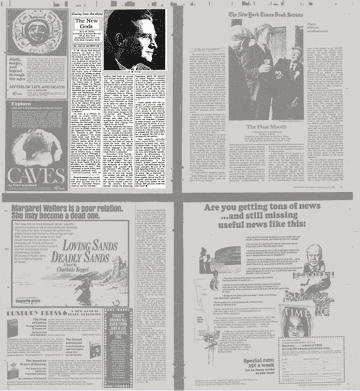 E. M. Cioran fled Rasinari, Rumania, to settle in Paris. France, in 1937. He was then in his twenties, just out of the university, and exile—the necessary condition of sympathy for a prophet—seems to have been his first and final calling. Alone and unfettered, he dwells in a desert of his own making: in this barren place of reflection his nerves are entirely at peace.

The titles of Cioran’s books indicate some of his themes, from “Précis de Décomposition” to “La Chute dans le Temps.” Called in French “Le Mauvais Démiurge,” “The New Gods” is the third of his works to be translated and it has the charm, vigor and fearlessness of the other volumes in his “philosophical romance.” One must admire an author like Cioran and also, perhaps, dread him a little. He is the subtlest living gazer into the abyss. His great subject of meditation has been the passage of mankind “from logic to epilepsy.”

To write in a foreign language as Cioran writes in French is to be shut out from certain temptations. Lucidity becomes the chief order of business. Quite possibly Cioran’s asceticism began as an effect of his style; he dislikes elegance of the approved variety, and prefers whatever is odd. “From logic to epilepsy.” The phrase might easily come from Dostoevsky, Nietzsche, Baudelaire, Cioran’s patron saints of the 19th century. But they were at best improvising from a dark text, whereas Cioran is a consistent and, when he can manage it without irony, a wholly convinced nihilist: “Thought is destruction in its essence. More precisely: in its principle. You think, you begin to think, in order to break bonds, to dissolve affinities, to compromise the scaffolding of the ‘real.’” That philosophy is truest which most annihilates itself.

Self‐consciousness, with its endleis trek back to ground zero, dictates the form and content of everything Cioran writes. The habit of inversion has bred in him a notable facility for the aphorism, and hardly a sentence in “The New Gods” is without its small cue of astonishment. Thus, in “Paleontology,” which is about old bones in a museum of natural history: “I suspect that I would never have returned—in flesh or in spirit—so often to those premises if, evidently, they hadn’t flattered my incapacity for illusion.” One notices how, like fossil‐words brought to life, “incapacity” and “flattered” perform a contrary dance around each other, first rewarding the narrator for his insight and then rapping him smartly for his conceit.

But the aphorisms that ask to be remembered are not merely verbal. “Incurable,” notes Cioran, “an honorific that should be applied to only one disease, the most terrible of all: desire.” Cioran has the precision of someone who does not respect words too much. After all, to adopt for a moment his bedside manner, language is the stammering that tries its power when silence is exhausted.

“Encounters With Suicide,” the finest essay in the book, offers a jagged image of life on the edge of things: “This passion in the middle of the night, this insistence on a final explanation with yourself, with the elements.” The thought of death revives you even as it sets you to rest and, though you tremble, you walk on and “your blood seethes.” (‘You” for Cioran is almost always first person singular.) Only after the decision has been reached “comes the reassuring impression which the absence of others inspires: everyone else is asleep. How to abandon a world in which you can still be alone? This night, which was to be the last, is the one you cannot part with, you do not conceive that it might be eliminated. And you would like to defend it against the day which undermines and soon submerges it.”

Cioran speaks with the authority of a survivor. And for all his avowed misanthropy—he is “crabby by divine decree” —his alacrity in the unlovely job of thinking against himself is surely tonic. He is free of the small arbitrary prejudices which can discredit a prophet at home or away, and if he lays himself open to attack, it is on the ground of temperament: that his cast of characters, humanity as a whole, is too large; or perhaps that the mood which has to support the cast is psychologically too narrow.

“The moralist’s primordial duty,” Cioran writes, “is to depoeticize his prose; only then, to observe men.” It may be said that he discharges the second of these duties admirably and the first with irregular success. Despite its idiosyncrasy his prose is often, if not poetic, at least artfully dramatizing. Yet self ‐ consciousness is the modern disease, quite distinctively so, and meditation of this kind, precisely because of its self‐regarding posture, can prevent it from becoming an ease. At times, like a character in Dostoevsky whom he must have studied, Cioran has the air of gently saluting and conversing with every bearer of bad tidings: Will you have some tea, Stavrogin?